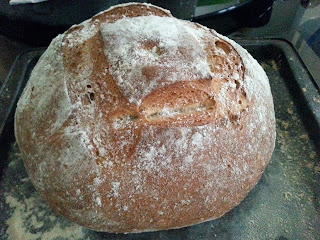 4) Once the dough has double in size, deflate the dough slightly and shape into round.
5) Place the dough on a baking pan dust with flour.  Cover and let rise until very puffy, about 1 hour. Towards the end of the rising time, preheat the oven to 200C.
6) Make slashes on dough with a sharp knife.
7) Place a tray with some ice cube in the bottom shelve of the oven.
8) Place the dough in the oven to bake for 25 to 30 minutes or until it is golden brown. Remove from the oven, and cool on a rack.
Note : The amount of flour required depends very much on the thickness of the sourdough starter.
Posted by Ling's Passion at 11:12 PM 1 comment: 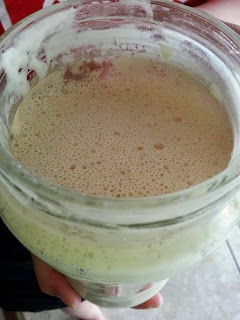 Stay tune as I will be sharing some recipes using sourdough starter.
Posted by Ling's Passion at 10:27 PM 2 comments:

Not sure what when wrong, but I can't seem to be able to type anything on this page unless I change the setting to HTML. Must be the blog acting against me since I have not posted anything on my blog for such a long time.

So this is just going to be a short post until I sort out the problem. 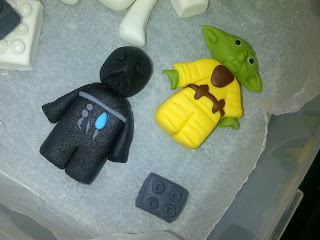 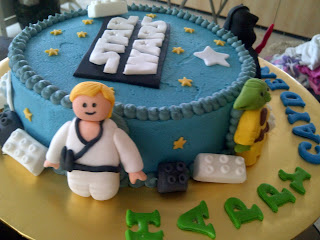 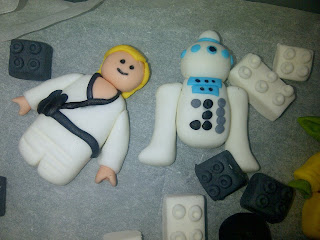 This is a vanilla butter cake covered with buttercream icing.
Posted by Ling's Passion at 1:29 PM No comments: 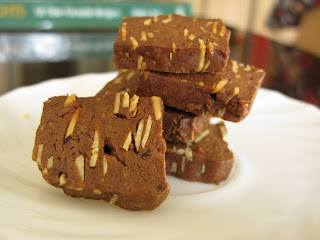 Have you come across cookies that do not look appealing but are delicious? This is one of them.

I chanced upon these cookies when I went on a hunt for recipes for my leftover almonds slices.  I really can't recall when I purchase these almond slices.  Good thing for Chinese New Year where it is customary to clear out as much old stuff as possible making space for new ones.  Otherwise these almond slices will still be sitting in the dark corner of my fridge.

The good thing about these cookies are, you can make the dough way ahead and freeze them.  According to some cookbooks, this cookie dough can be kept frozen for up to a month.

When it comes to baking, there is no short cut where these cookies are concerned.  You need to bake them for at least 20 minutes depending on the thickness of the cookies, otherwise you will end up with soft cakey cookies.  That was what happen to mine.  I baked them for only 15 mins thinking that it would be ready by then.  But they turn out cakey and I had to rebake them for a further 15 mins.

1.  Cream (A) till well bleanded, then add in (B) and cream till smooth.
2.  Add in the sieved (C) then followed by (D) and mix till well blend.
3.  Press the dough into an 8 inch square baking pan lined with grease proof paper.
4.  Refridgerate overnight or till the dough is very firm.
5.  Remove dough from fridge and cut into 40mm bars.  Then cut into slices of 5mm thick.
6.  Place cut dough onto greased baking tray and bake at 170C for 20 - 25 mins. 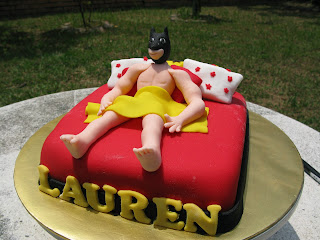 Last week was our friend, Lauren's birthday.  We, her lunch buddies decided to give her a surprise lunch and a little fun.  We got together and planned a movie followed by lunch in a Japanese restaurant.  The movie is non other than the Dark Night Rises that is showing on the cinema circuit.

Wanting it to be a memorable surprise for her since she was hitting her BIG 30, we decided to give her a Man-in-waiting cake.  Well of course not any man will do.  It has to be one with the 4Ps - Power, Position, Physic and Popularity.  We decided on Dark Knight, a follow-up from the movie.

As I have been using my cake caddy lately, it did not cross my mind that I need to be more discreet when transporting this cake around in my transparent cake caddy.  It only dawn on me when the cake appear so provocatively from the outside of my cake caddy.  I had to cover the sides of cake caddy with paper.  And this was a good move as Lauren didn't notice the cake until it was presented to her. 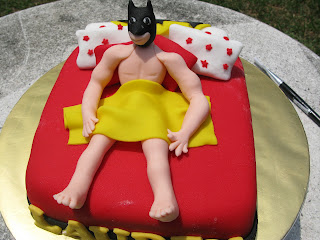 Her eyes almost popped-out when she saw the cake.  But we could tell that she secretly like it and was caught peeping beneath the yellow cover (wink).

Happy Birthday Lauren.  Hope you had a great time with us.  And thanks for sharing your man (I echo what Shereen said)